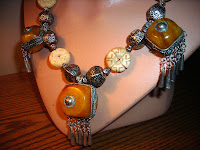 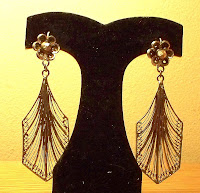 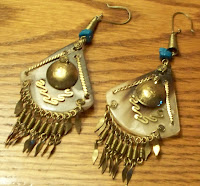 I picked up a ton of jewelry recently from a local estate. All of it was from the 1970s or so and, to me, epitomizes boho hippie chic! Tons of beads, mixed metals. Everything hand crafted and one-of-a-kind.

Most of this jewelry’s going to end up in my eBay store. See the link to the right of the blog.

If you’ve been reading my blog, you’ll see that I’ve already written about one of my pickers named Darrell. I’ve purchased from another picker named Sally over the years, but she’s what I call an “undercover picker”. This means she sells things to me but doesn’t want anyone to know, especially her HUSBAND!!!

I don’t want to give too much away but her husband sounds like a hoarder. According to Sally, the husband is manic at buying and hoarding antiques, collectibles, goodwill quality items and rancid junk. He stores his hoarded items in various jam-packed storage units all over the city and pays storage bills higher than their household rent. This storage unit rent is literally breaking their budget but the husband won’t stop. He says that his treasures are too valuable to sell. So, in order to survive and cover household bills, the wife trades secretly on the side.

I’m sure I’m not the only person Sally sells to. But dealing with her requires an entirely new language, one that won’t give her away when the husband is possibly listening. According to Sally, she’s allowed to sell linens (don’t ask me why) so the word “linens” has become code word for what I REALLY want — jewelry. Our telephone conversations go something like this…”Hey, Sally, I’m looking for some “linens”. (Wink, wink.) Do you have any new “linens” to sell me?” Sally replies, “Yes, let me call you back”.

So, later I usually will get a call from Sally with a very brief window in which she can meet and let me look at her goods. One time her husband walked in on us while she was showing me some “linens” and I had to shove the stuff in my big purse and run into the bathrooom. After waiting an inordinately long time and realizing that the husband was not going to leave, I strolled out of the bathroom and said, “Oh, hi husband! I didn’t realize you were here! I just came to visit Sally. Well, I’d better be going!”. I backed out of the place with the jewelry still in my purse.

I had to go back days later to conclude the deal with Sally.