Matisse was a well-known maker of copper and enamel costume jewelry.

Matisse’s sister line was Renoir, which featured copper jewelry with no enamel.

This maple leaf design is a classic Matisse motif. 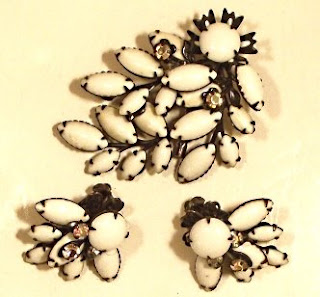 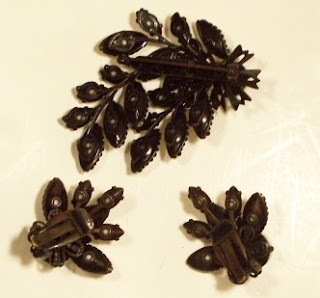 In costume jewelry, the term “japanned” denotes jewelry that has a black and glossy finish on the setting. See the photo!

I set up a space and sold jewelry this past Sunday at the Burlington Antique Show in Burlington, KY. I’m always nervous before doing these things because it requires a lot of advance preparation without knowing if there will be enough sales to make it worth the effort. I’m also nervous about thinking I’m going to get there too late. I arrived a little before 7am on Sunday and was definitely one of the last dealers to arrive but that’s about as early as I’ll ever be…..

Regardless of the slightly chilly and wet weather, a large group of enthusiastic people were at Burlington on Sunday. It’s always fun to meet new people and to see some that I sold to last year.

I would say that the majority of my sales were higher end costume jewelry and sterling silver jewelry. There were a few dealers and collectors that honed in on the higher quality jewelry and much of it was sold.

Now my challenge is to find more! 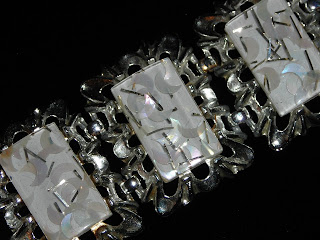 Thermoset lucite jewelry was manufactured predominantly in the 1950s-1960s by many costume jewelry companies. It was great for jewelry because the lucite (a heavier plastic) could be molded into many creative shapes and designs. I’ve seen many examples of thermoset lucite by well-known manufacturers such as Lisner, Coro, BSK, Trifari as well as other makers signed and unsigned. 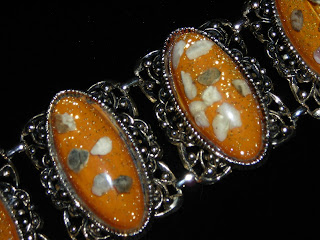 Lucite can be opaque or translucent. It can also have objects embedded into it….objects such as abalone pieces, or shells, or confetti or glitter. Confetti lucite is exactly as it sounds: lucite with confetti or glitter embedded inside. The bracelets pictured are wide with lucite pieces with embedded items. They are available on my web site with the link below.

My kids have always hated old stuff. I’ve got these 1950s dishes that my son refuses to eat off of because the brown colors gross him out. He has his own personal bowl that no one is allowed to eat out of…the bowl is totally white. I guess he likes his white bowl because he can tell when it’s clean and that it’s not “contaminated” with the cooties of previous owners.

My daughter is the same way. For years, she has spurned my efforts to give her vintage jewelry from my collection. I can shake an old necklace at her like a voodoo totem and she’ll back out of the room. I always said to her, “I bet other girls would just love to have some jewelry”. Well, my prediction has come true. Her friend Sara loves to come over and pick through my jewelry to find the funkiest piece in the bunch. Last week, Sara took home some truly strange fuzzy Christmas wreath earrings with reindeer leaping across the front. Now that my daughter’s friends are interested in my jewelry, she is too.

So, this post is for my daughter. I’m glad that she will at least stay in the room when I drag my jewelry out to show her…… 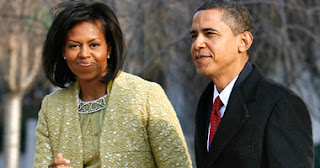 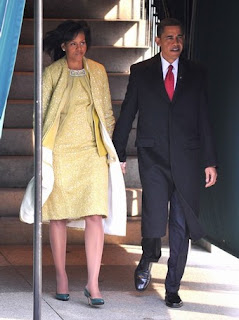 Michelle Obama wore a costume jewelry piece to the 2009 Inauguration. The colorless rhinestone piece appears to be attached to the sparkling Isabel Toldeo designed dress.

Note that the length and width of the piece is a perfect addition to the neckline of the dress.

This look proves that it’s OK to wear big rhinestones during the day, as long as they complement the oufit and don’t overwhelm it!!! 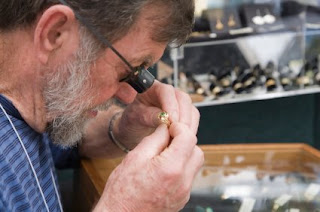