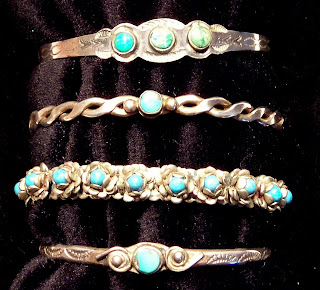 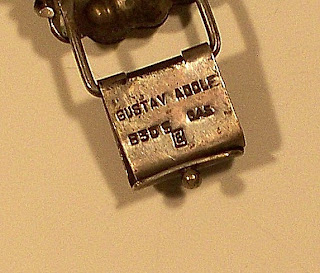 The purpose of this blog entry is to help a buyer/collector identify the silver content of jewelry based on the silver marks present on the jewelry. It will be helpful for you to have a jeweler’s 10X magnification loupe on hand. These can actually be purchased right here on eBay and are very helpful for identifying jewelry marks.

My guide is quite simple. There are a couple of excellent web sites out there with a world of knowledge. If you Google “Silver Marks”, you’ll probably find some excellent resources.

First, look on the back of your jewelry for any silver stamps.

1.STERLING SILVER:
What is sterling silver? Sterling silver is silver that is 925/1000 parts silver. Pure silver is too soft for jewelry making so the highest silver content usually (but not always) found in silver jewelry is .925.

Since the early 1900s, American sterling jewelry has been required to have a sterling mark if it is truly sterling silver. In my experience, older sterling is stamped “STERLING” usually on the back of the piece of jewelry. Sometimes you might see a portion of the word, such as “STER”. This might be because the jewelry was stamped this way or it might have worn away over years of wear.
Newer sterling silver jewelry is often stamped “925”. Again, this stamp is meant to convey the silver content of the jewelry. I’ve also seen “SS” stamped on a few pieces, but this is rare.

2. 950 STERLING MARK:
I’ve seen a 950 mark on vintage jewelry once in a while. Usually, it’s been on Mexican sterling before WWII era. 950 silver does have a higher silver content than sterling but is not seen too often.

4. 800 SILVER
Sometimes, you’ll see an 800 stamp on a piece of vintage silver jewelry. This means that the content of the jewelry is 4/5 silver.
Many times, based on the style of the piece and the 800 stamp, this will point my jewelry research toward European jewelry or other foreign makers. I’ve seen vintage silver filigree jewelry with an 800 mark.

5. SILVER TESTS
Commercial silver test kits are available for silver (and gold) jewelry. These are probably available on eBay. I personally do not use these. If I have a question about my vintage jewelry after I’ve exhausted my own research, I take a trip down to see my favorite jeweler for his advice. 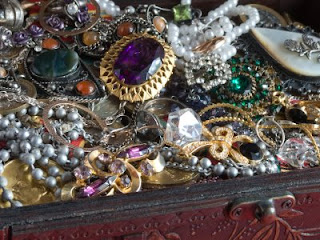 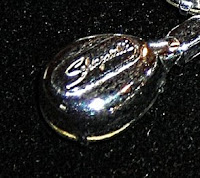 You’ve just obtained a beautiful vintage costume jewelry pin! You’d like to know how old it is and who made it. If you spend enough time around vintage costume jewelry, you’ll begin to see that most manufacturers had styles, patterns and techniques that were specific to that maker. But without looking at anything else, many times it’s possible to identify a piece of jewelry solely by the stamps/names/maker’s marks on back.

There are a couple of web sites that are incredibly helpful in identifying makers’ marks and learning about the jewelry makers. My favorite is Illusion Jewels website. This site lists many makers, the dates they were in business, and lots of photos of their marks. I use this site almost every day. www.illusionjewels.com/costumejewelrymarksa.com

Morning Glory Antiques and Jewelry is a gorgeous site which shows photos of some marks but also has many reference pages with photos of classic vintage jewelry such as Trifari, Eisenberg, Miriam Haskell. http://www.morninggloryjewelry.com/jc/JewelChatMarks.html

There is a website which is a virtual museum of Classic Trifari jewelry from before 1960. N&N Vintage Jewelry sells Trifari and other makers but their photos and info are fantastic. Check this site out! www.trifari.com

Another thing that I do with good results is to Google the heck out of a jewelry mark. If I’ve exhausted my favorite web sites and cannot find info, I’ll Google a description of the mark. There are many marks which are just letters and symbols. I’ll literally describe this mark on Google and see what pops up. Sometimes I’m able to find the makers from this technique.

And, of course, eBay is an excellent resource. Once I’ve identified my jewelry, I always check out Current and Completed auctions to see what things are selling for.

There are many more helpful sites out there, and I’ve barely even touched on the subject. I’ll talk more in later blogs.