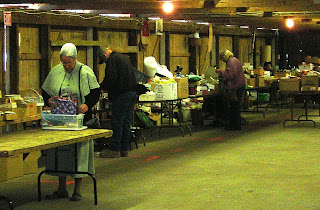 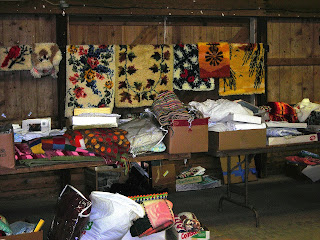 I went to an auction yesterday at the Preble County Fairgrounds in Eaton, Ohio, known as the birthplace of Swine Improvement in America. No swine were visible yesterday. The crowd included farmers, townspeople, and the same old antiques dealers and gold buyers whom I see at every auction in Cincinnati.

There was so much to sell that it filled two large rooms inside the fairground buildings. I love auctions like that because it usually helps keep prices down when there is an abundance of goods. Yesterday, though, auction bids were surprisingly high….apparently the recession hasn’t hit Eaton, OH. There were at least 200 ziploc bags of jumbled vintage costume jewelry for sale. I competed against one particular guy in overalls (!) and paid dearly for about 20 bags.

There was half of a room dedicated just to sewing supplies. In boxes of supplies, I would see a bakelite clip here and a bakelite clip there. I intended to stay and bid on these boxes but eventually ran out of time.

My best purchase was a 1970s Lanvin signed colorful enamel pendant necklace. Very Pucci looking. I hope to list it on eBay sometime next week.